If you like my Chocolate and seed granola but are finding the current weather conditions a bit chilly in the mornings, try one of my alternative ways to serve it. 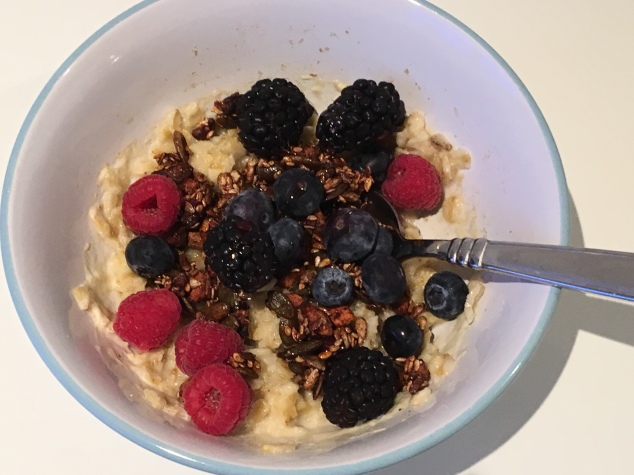 I make a dairy free porridge using jumbo porridge oats with hemp milk. Once my porridge is cooked I top it with a sprinkling of my granola, which adds a nice bit of crunch, some fresh berries and a drizzle of agave nectar or honey. It keeps me going for ages and is really hearty.

This is super easy and great for a cold morning when you need extra time to go out and scrape the ice off the windscreen!

I buy a bag of frozen mixed berries from Sainsbury’s. I’m the morning I grab a handful of frozen berries and zap them in the microwave on full power for 60-90 seconds. Then I add a generous portion of granola and top with a dollop of Alpro coconut yogurt. Perfect!

How do you like to serve your granola in the morning? I’d love to hear your favourite ways!

I’m in the minority of people that like sprouts, and I think it’s a shame that I only eat them once or maybe twice a year.

They are a bit of a pain to prepare, but then so is an avocado and they’re the cool kid everyone wants to be BFFs with. In comparison the humble sprout is the geeky quiet kid in glasses that everyone shuns. But, just as the geeky kid in most teen movies gets their girl/boy/new found popularity delete as appropriate), I’d like to see the sprout have its day.

I think a lot of the bad press with sprouts is that they’ve been sorely mistreated. Some chefs will be bringing theirs to the boil now, ready for Christmas 2018! Others will wait until 11:52 on Christmas morning, and they’ll be so hard you’ll need to wear safety glasses while attempting to get them on your fork, in fear of a stray sprout pinging off your plate and whacking you in the eye!

If I’m having sprouts with Christmas dinner, I like to gently part boil them, then stir fry them in a wok with a bit of chorizo. The flavours work really well together. Chorizo makes everything better, so even the sprout haters in my family find these palatable.

I’ve embarked on a low carb, high fat diet for the new year, and being allergic to eggs and dairy, breakfast is a particularly tricky meal for me. When I tried this diet a few years ago I had cold meats and dairy free cheese for breakfast, which was ok, but not great on a cold January morning.

I scoured Pinterest trying to find something suitable to try, and came up with nothing. So I turned to my cupboard of recipe books and remembered that a few months back I tried Hemsley + Hemsley’s bacon and bean hash, which was nice. However for the first two weeks of the diet beans should be limited, so I got my thinking cap on for ideas of how to bulk the recipe out. My mind said sprouts. And why not? They’re in season, they add flavour and bulk, and I know they work in bubble and squeak.

So I pimped the recipe slightly, and cake up with my own breakfast bubble and squeak. Really you can add whatever you fancy, but I used chopped streaky bacon, onions, celery, white cabbage and sprouts. I part boiled the sprouts so they were easier to mash into the mix. 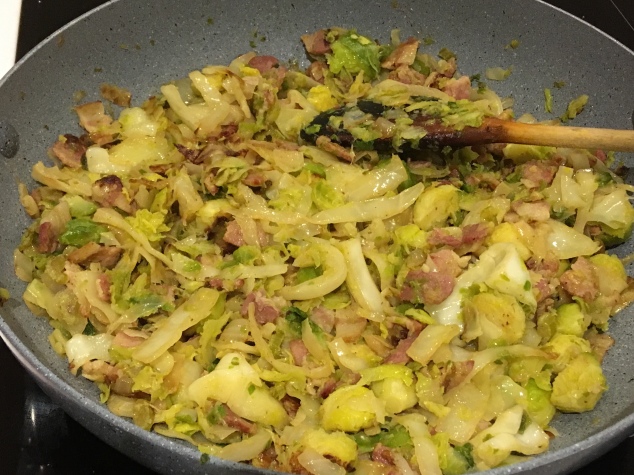 I stir fried the mixture until it was begging to brown in places, and added a little hot paprika, ground cumin, salt and pepper. 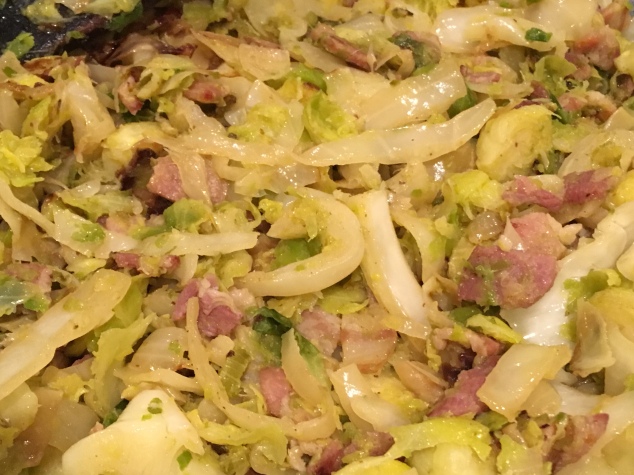 I served it this morning with a couple of slices of black pudding. Yum! Just what I needed at 6am on a chilly Monday. I’m hoping it will keep me going until lunch time.