I’ve spent the last week trying to organise a cream tea with friends.  This ought to be a straightforward task, but it has proven challenging to say the least!

I stumbled upon Gracie-Ann’s Tea Room whilst trying to find somewhere for lunch with the girls.  Located at Port Solent in Portsmouth I was excited to find a local small business amongst the chain restaurants that dominate Port Solent.  Situated on the first floor of The Trading Post, this little tea room has a lovely view of the marina.

What really drew me to Gracie-Ann’s is that they advertise on their website that they cater for allergies. I previously contacted two other tea rooms in the area.  One said they couldn’t cater for me and the other didn’t even bother to respond.

I always like to discuss my allergies in advance with a new venue.  This gives the venue ample warning and gives me confidence in the venue. I initially contacted Gracie-Ann’s through their Facebook page, and they quickly responded asking me to call to discuss the booking.

I called the same day on my commute home, but found that my phone signal kept cutting out and the conversation just wasn’t working.  I was in and out of meetings and a round of telephone tennis ensued over the next few days, until I finally spoke to someone on the Friday to confirm my booking for the Saturday.  Five minutes later she called back to say that unfortunately the gluten and dairy free scones we’d discussed had an egg wash and they were unable to make just one eggless scone. I was disappointed but I thanked her for letting me know. Suddenly I heard another voice in the background and she announced that they could cater for me after all as the kitchen could do a Vegan scone! Excellent! I made my booking but made a backup plan just in case the Vegan scone wasn’t available.

I was thrilled that upon arrival the waiting staff had been prepped about my allergies and I was served the biggest fruit scone I’ve ever seen, with strawberry jam and dairy free spread on the side. The scone was warm and unctuous, and was washed down nicely with a pot of tea with soya milk.

As an aside, Gracie-Ann’s also does a beautiful range of herbal/floral teas which look simply stunning, although these aren’t included in the cream tea.

I only have one criticism, which is that the tearoom was very noisy, to the point where I was struggling to hear my friends and was almost having to shout to be heard. I’m used to tearooms being quiet and peaceful places, but unfortunately there was a large hen party which increased the volume.

Will I go back? Definitely!

If you’re looking to make your own Vegan scones, try this recipe that I found on Pinterest: Vegan Scones 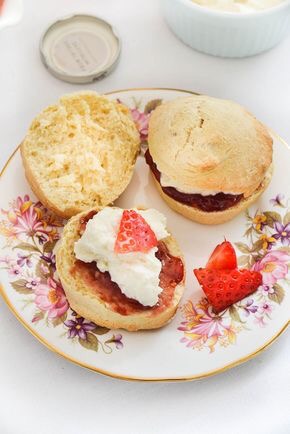